IF AN EVENT RESULTS IN TRAUMA IN THE BODY IS NOT DETERMINED BY THE EVENT BUT IS DETERMINED BY THE NERVOUS SYSTEM TO MOVE THROUGH ACTIVATION (FIGHT, FLIGHT OR FREEZE) AND RETURN TO A BASELINE REGULATED STATE.  WHEN ONE HAS A HISTORY OF DEVELOPMENTAL TRAUMA, CHILDHOOD ABUSE OR AN "UNSAFE" CHILDHOOD (INCLUDING RACISM, SEXISM, HOMOPHOBIA, ETC) THE NERVOUS SYSTEM IS MORE VULNERABLE TO FUTURE TRAUMA WHICH CAN MANIFEST IN PANIC, ANXIETY, DEPRESSION, CHRONIC ILLNESS, PATTERNS OF POOR RELATIONSHIPS, POOR BOUNDARIES, SLEEP DISORDERS, DISORDERED EATING, ADDICTIONS, FEELING STUCK, LACK OF MENTAL FOCUS, CAN'T FEEL BODY, TYPE-A BEHAVIORS, ETC.
TRAUMA:  ​"A life-threatening experience, either ‘real’ or imagined, may also become a traumatic experience if it occurs in a state of helplessness. The field of psychology accepts the premise that such trauma affects the mind. Through imaging studies we now know that trauma affects the structure and physiology of the brain as well. If we accept the idea that the mind, brain and body exist on a continuum, then we must also consider the ways in which trauma affects the brain / body. Ideally, the brain / mind / body uses what it learns from a traumatic event to develop resiliency and fortify the individual against future similar occurrences. However, depending on the individual’s prior experience and the nature and outcome of the event, the trauma may actually lead to dysfunctional physiological change in both the brain and body. The dynamic interaction of the brain / body in turn sends cues to the mind affecting what it senses, feels and perceives. If the brain / body has been overly conditioned and sensitized to react to life threats, the mind will perceive threat in situations where none may exist..."  --Robert Scaer
Some categories of trauma are obvious such as childhood abuse, experiencing war or being assaulted, but there are somewhat less obvious sources of trauma that are important to be aware of such as:  being sedated for surgery, emotional neglect, having parents who were neglectful or depressed and unable to emotionally attune, being exposed to adult content or horror films at a young age, being in an incubator or other birth events such as having trouble coming down the birth canal or c-section birth, being misunderstood by family or peers in an on-going way, accumulated daily living challenges such as living paycheck to paycheck, systemic oppression...  The list goes on for trauma that we might not realize qualifies as trauma.  Bringing awareness and attention to trauma is the first step to resolving and freeing the body.
POLYVAGAL THEORY EXPLANATION VIDEO
POLYVAGAL EXPLAINED w/ VIDEO & GRAPHIC

"The vagus nerve is the tenth cranial nerve (CN X) and is the longest mixed cranial nerve. The literal translation of the vagus is 'wanderer,' which aptly represents its widespread interfacing of cortex, brainstem, hypothalamus, and the body. Its afferent and efferent pathways comprise about 80% and 20%, respectively."
​
"This nerve is the sensory network that tells the brain what’s going on in our organs, most especially the digestive tract (stomach and intestines), lungs and heart, spleen, liver and kidneys, not to mention a range of other nerves that are involved in everything from talking to eye contact to facial expressions and even your ability to tune in to other people’s voices. It is made of thousands upon thousands of fibers, operating far below the level of our conscious mind. It plays a vital role in sustaining overall wellness. It is an essential part of the parasympathetic nervous system, which is responsible for calming organs after the stressed “fight-or-flight” adrenaline response to danger."   --from Physiopedia 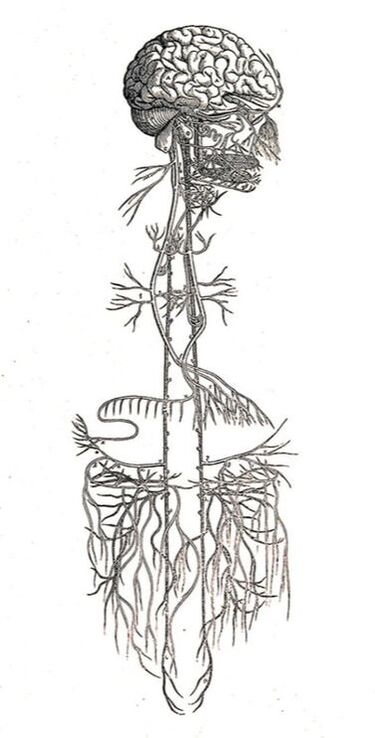